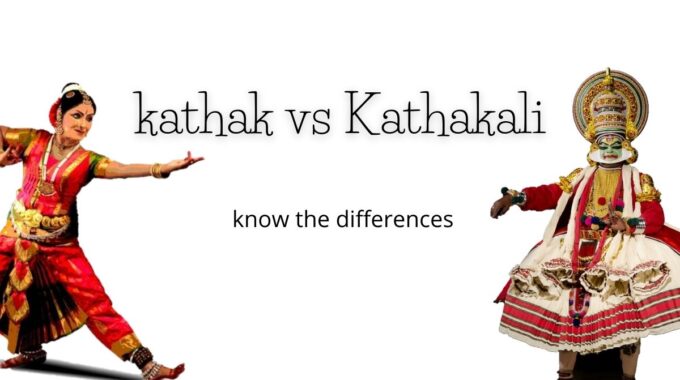 Kathak Is the part of Indian classic dance. The “Kathak” word means is katha which means in Sanskrit is story, what is why this is also a storytelling dance, its roots are from Hindu Sanskrit text natya sastra. Its originated from three famous state Varanasi, Jaipur or Lucknow In India. But every states has played different role to developed this style, Varanasi and Lucknow both states has focus to developed or improve the footwork movements of this dance style or the Jaipur state has focus to developed or improve the facial expression of this style. this dance is mostly perform on the 12 types of instruments.

Kathakali is also a part of Indian classical dance which is originated from the state of Kerala which is a home several or traditional dance styles. This dance is also based upon Hindus ancients Purana, Mahabharata, or Ramayana. This dance is developed in the Kerala temples and it is also based on shree Krishna activity or this dance style is also a storytelling dance form it is famous for its make up or costumes which are usually use to perform a story or choreography. But the kathakali dance is totally based on mudras or hands movements. And the 3 major instruments which are use in kathakali dance.

For more information about kathakali visit my another post “origin of kathakali” or you can also click here…..

The differences between kathak and kathakali. Both styles are parts of Indian classical dance but both come from different states. Kathak had come from north Indian states Jaipur, Vanaras or Lucknow which are also known as gharanas and the kathakali has come from south Indian state Kerala which is known as home several of traditional classical dance but the fact is this kathak dance is focus on the footwork’s or footsteps and the Kathakali dance is focus on the hand movements which are called mudras. So the conclusion is all about kathak or kathakali dance are both are different dance style not are same but most people think that both styles are same because of pronouncing sound of styles.

Mohiniyattam dance transformation – You should know
Mohiniyattam is One of the best parts of Indian classical dance or folk dance of India. It also comes from Kerala (India) like another classical dance style, this dance form found its name Mohiniyattam from the Mohini word, which mythical enchantress avatar of the Hindu lord Vishnu.
Covid-19: Top exercise to stay fit at home during quarantine or lockdown
due to Covid-19 or coronavirus all over the world. From the Indian dance world, we want to help you guys to get fit stay fit at home, and try these workouts to make your body strength high to fight the disease. So just start and follow with simple exercises daily at your home, because we need to follow the social distancing to stay safe from covid-19
Kuchipudi dance genius world record
So, guys, today will know the power of Kuchipudi dance, or Indian classical dance form that has achieved many Guinness world records with their popularity or the artist strength, which explains this classical dance has its own history with the own culture that loves all over the world.
Copyright Indian dance world 2022 - All Rights Reserved
Back To Top