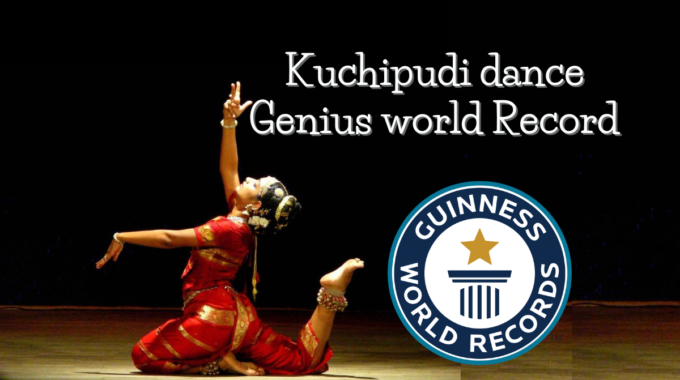 So, guys, today will know the power of Kuchipudi dance, or Indian classical dance form that has achieved many Guinness world records with their popularity or the artist strength, which explains this classical dance has its own history with the own culture that loves all over the world.

So here we go with recent…

ANDHRA PRADESH SOCIAL WELFARE RESIDENTIAL EDUCATIONAL INSTITUTIONS SOCIETY has bagged the Guinness world record on 11 APRIL 2017, with 7,002 dancers who will perform at INDIA (VISAKHAPATNAM). this record of Kuchipudi dance makes India proud on indian classical dance or culture. which is becoming popular worldwide and many countries want to learn classical dance styles.

The ANDHRA PRADESH SOCIAL WELFARE RESIDENTIAL EDUCATIONAL INSTITUTIONS Society runs 188 residential foundations in Andhra Pradesh under the depart of Social Welfare, Govt of Andhra Pradesh. The Society institutions direct residential training to SC/ST/BC communities from fifth to Intermediate classes. As a significant aspect of helping to enter proficient courses, Society leading unique training to the intermediate students for IIT/AIEEE and EAMCET entrance tests. The prime goal of the Society is to give quality residential training to the above-targetted networks. The organizations are driven by the supervisory group through Head Office situated at Masab Tank, Hyderabad.

CA in 2008, first time for largest Kuchipudi dance consisting of 332 performers at Cupertino. all the artists from India.

Andhra Pradesh In 2010, the 2nd world record was set by 2800 dancers performing for the thillana. The President of India, Smt. Pratibha Patil. Was the chief guest of that event.

Hyderabad on December 25th, 2012 at GMC balayogi stadium gachibowli: performance by 5,974 Kuchipudi dancers has found a new way into the Guinness Book of World Records for being the ‘largest Kuchipudi dance’ The artist of different ages well performed on different songs at the same time to cross the record as part of the third International Kuchipudi Dance Convention here last night. The event was set by Silicon Andhra, a cultural organization run by US-based Telugus, at the GMC Balayogi stadium here.

Silicon Andhra is a non-benefit association with objectives to keep up and sustain the Telugu Samskruti (Culture), Sahityam (Literature), and Sampradayam (Tradition) among the Telugu-speaking people of the USA. Silicon Andhra is resolved to raise the consciousness of the Telugu culture among the inhabitants of the US and incorporate it flawlessly with the standard US culture by sorting out one-of-a-kind social and scholarly occasions that delineate the rich social legacy conventions and crafts of Andhra Pradesh. Silicon Andhra speaks to the desires of around 30,000 in number Telugu-talking individuals in Silicon Valley, California.

so you have got the right knowledge or history about indian dance so would I like to say to dancer keep learning and dancing whatever dance form you like.

Mohiniyattam dance transformation – You should know
Mohiniyattam is One of the best parts of Indian classical dance or folk dance of India. It also comes from Kerala (India) like another classical dance style, this dance form found its name Mohiniyattam from the Mohini word, which mythical enchantress avatar of the Hindu lord Vishnu.
Covid-19: Top exercise to stay fit at home during quarantine or lockdown
due to Covid-19 or coronavirus all over the world. From the Indian dance world, we want to help you guys to get fit stay fit at home, and try these workouts to make your body strength high to fight the disease. So just start and follow with simple exercises daily at your home, because we need to follow the social distancing to stay safe from covid-19
Information about Odissi dance – Know in the Deep classical dance
To know all about Odissi dance first need to know Odissi dance, The part of Indian classical dance form is the Odissi dance style generated from Odisha, also mentioned as Orissa name in chronic literature, and a leading old Indian classical dance which is developed from Hindu temples in Oddisa – an eastern state of India. in Odissi history,
Copyright Indian dance world 2022 - All Rights Reserved
Back To Top